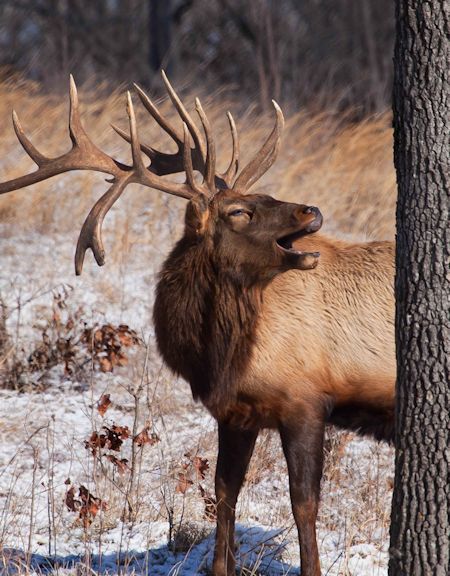 An elk makes his presence known at the Elk & Bison Prairie at Land Between The Lakes. Photo by Melodie Cunningham.

Between the wildlife refuges and Land Between The Lakes National Recreation Area, the Kentucky Lakes Area is home to incredible opportunities for viewing wildlife.

If you are wanting to visit the Kentucky Lake area to see wildlife, Land Between The Lakes National Recreation Area should be at the top of your list.

With several secluded places to view wildlife and areas where you can see captive creatures up-close (most of which are rescues), LBL is a dream for wildlife viewing.

For detailed information and places on where you can experience wildlife in Land Between The Lakes, see our LBL Wildlife Viewing section.

There are three units that make up the Tennessee River Wildlife Refuge: Big Sandy, Duck River, and Busseltown. These three areas create around 65 miles of area on and around Kentucky Lake in Tennessee. You can witness a wide array of habitats, including croplands, vegetated wetlands, mudflats and scrub areas.

This wide range of habitat allows for abundant wildlife. One of the more abundant animals you'll see at the refuge are whitetail deer. There is a significant population of these deer. Additionally, smaller common animals such as raccoons, squirrel and foxes can be seen.

In fact, there are over over 300 species of birds recorded in the refuge, along with 51 mammals and 89 reptiles and amphibians.

The Tennessee River Wildlife Refuge features two hiking trails and four observation decks. Visitors will have ample opportunities to witness the wildlife of the refuge. To find out more, visit their website.

One of the larger tributaries of the Tennessee River is Clarks River. It meanders through Calloway and Marshall counties, about 15-30 minutes from Kentucky Lake, depending on which part of the river you're at. It isn't navigable, it's more like an oversized creek.

In 1997, the Clarks River Wildlife Refuge was created with 8,000 acres of land purchased in Marshall County in the river area. It is one of the largest remaining bottomland hard wood forests in the region.

Visitors can walk along the 1.5-mile rail trail near the town of Benton to get a glimpse of some of the animals that inhabit Clarks River Wildlife Refuge. These animals include whitetail deer, bobcats, river otters and spotted salamanders.

Bird watchers can spot rare warblers and thrushes, along with other songbirds, raptors and waterfowl.

Clarks River Wildlife Refuge Headquarters is open Monday through Friday from 7 a.m. until 4 p.m. It is closed on all Federal holidays.  You can visit their website for more information.

Just four mile east of Dover, Tennessee and the Cumberland River (Lake Barkley) lies Cross Creeks Wildlife Refuge. Established in 1962, one of the Refuge's primary functions is to provide feeding and resting habitat for migrating birds, especially wintering waterfowl. You'll see a variety of ducks and geese, along with herring, osprey, turkey and more.

In the spring months, nature watchers will be able to spot wild turkeys, blue winged teal and a number of songbirds migrating through the area. In summer, beavers, owls, and various species of turtles can been seen.. The blue-winged teal migration begins the early autumn months. During September and October, visitors can also expect to see monarch butterflies, osprey and whitetail deer. Toward November, wildlife enthusiasts will want to keep a watch out for bald eagles.

Cross Creeks is closed from mid-November to mid-March, to provide waterfowl with refuge for the winter.  Find our more about Cross Creeks... visit their website.