Hey Folks from the Excel Storm Cat 230. From the wet feeling of my tee shirt, I think summer temperatures are here.

Just a short note about what has been going on with the fishing. Vicki and I are headed to Grenada Lake later this week. It will be her first trip to the lake where she will get to fish.

Last year, flooding prevented us from fishing, so we came back home. Hot summertime has always been my favorite time to be there and from the weather reports, it looks like the weather will cooperate.

I fished both out of Sportsman’s and out of Lynnhurst the latter part of the week. A cool front with threatening rain slowed fishing to the north but Saturday found sunny skies and eager crappie and catfish in the Blood River area.

Both areas saw crappie reluctant to hit our crankbaits hard enough to assure hook-ups most of the time. Both trips we lost lots of hits that didn’t hook. Sometimes it happens.

One thing we did see in both areas was lots of sub-legal crappie eager to take the baits. I’m also seeing lots of shad schools or baitballs show up on my electronics.

The crappie are still near depth changes but more are showing up on flats with deeper water nearby as they chase schools of shad. When the shad are present, so will be all species of gamefish and some rough fish like drums and catfish.

My hands took a beating last week from trying to unhook catfish that had attacked our lures. One encounter left me with a cut I probably should have had sewn up, but time didn’t allow.

I’ve been hooked dozens of times but getting finned to the bone then cut by a hook to the bone on the same finger at the same time is the ultimate insult. I’ve ordered a specialized glove to help protect my left hand. My right hand usually has pliers in it when handling fish.

Look for flats with over 15 feet of water close to deep water as well as breaklines on channel ledges and drop-offs. A point on a map will always attract my attention.

Crappie as well as other game fish will hide behind points along the main and secondary channels, getting out of the current waiting for food to wash by. Peanut Butter and Jelly pattern Pico INT cranks have been especially good lately. Benson’s in Murray and KY Lake Outdoors in Draffenville carry them.

Vicki drove down to Lynnhurst Family Resort Saturday after she toured most of eastern Calloway County. She thought it would be OK to try to navigate by cell phone from Murray to Lynnhurst.

One thing she didn’t consider is lack of cell service in areas. She will be navigating by that square display in her dash from now on.

She got there just as James, one of the owners, had gotten the homemade ice cream out of his very unique freezer.

There must have been a dinner bell rung at the same time as the marina soon filled up with boats docking so folks could get a portion of this wonderful treat. Some folks even drove down from Murray just to try it. I’m a big fan of ice cream and this was some of the finest I’ve ever had. It was amazing!

Be careful out there. This heat is to be respected. Carry plenty of ice water and some shade if you have it. Try fishing early and late. Leave the middle of the day for the jet skis and wave boats. Wear those PFDs and help those who need it.

Welcome to our slice of Heaven! 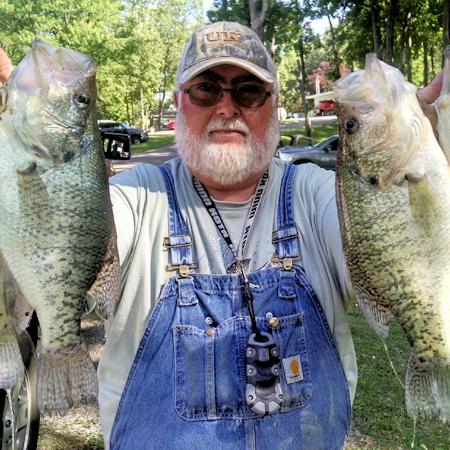