I hope this report finds everyone doing well. Summertime made its arrival this week. Temperatures are in the mid to upper 90s with heat indexes well into the 100s. I can assume that all my clothes will be fitting better real soon, because, being a large fellow, I’ll melt like lard in a skillet in these temperatures.

Maybe, if we’re lucky, these hot temps will only last a little while and we will have a slight breeze to provide some relief while on the water.

The month of May proved to provide better bluegill fishing than in the last couple of years. While it wasn’t always consistent, there were several days where good catches were had. It still seemed like places that have been seined the day before, took a long time to replenish if they even did it all.

While I was able to find fish in places, I was careful not to pull too many off of one spot. All of the females I caught were returned as well to try to save some for seed for years to come. I hope that this is a positive sign of life from the lakes after being in a down cycle in previous years.

I had the honor and privilege to fish the Ronald McDonald house charity tournament the first Saturday in June. This charity raises lots of money for folks in need. It brings people together to give back while providing a great time to all who attended the dinner and silent auctions as well as those fishing in the tournament.

Folks were able to bid on who they wanted to fish with in each division, bass or panfish. It was amazing to see how generous the bids were to help this great charity. John Colgan and his brother-in-law Drew were the high bidders for me in the panfish division. Having always fished the bass division, John was wanting to try something different this year.

When taking people out, I never want to disappoint, and after seeing the bid they put down, I didn’t get a whole lot of sleep the night before. I was hoping the fishing would be as spectacular as the day the weatherman said we were in for.

As luck would have it, the fishing was as awesome as the weather! John and Drew finished the day with 24 pounds 5 ounces of bluegill with 2 trophy red ear as a bonus. This put them in first place in the panfish division and the weight was even more than the bass division by almost 10 pounds.

It was a great day for these men as well as the charity. A big thank you goes out to Ron Lappin for getting the guides together as well as everyone involved with making this tournament a success.

While I spent a lot of time bluegill fishing, I also targeted some catfish while on the water. These fish proved to be a little inconsistent for me as well.

Some days, I was able to catch them shallow while other days it seemed like they were deep. And then there were days I didn’t even feel like there were any in the lake, as bites were hard to come by.

Lately, I have been on the hunt for white bass and yellow bass. Unlike last year when the white bass fishing was hot, this year has been much tougher. Different conditions from last year, with very little current flow have made these fish pretty elusive for me to catch.

I’ve had a few good days, but there hasn’t been any consistency except the lack of current. This has pushed me to look for yellow bass to tug on my line. While I basically lost these fish in the month of May, I began picking them up again in June.

The difference between this year and last year is they don’t seem to be schooled up in as many places as years past. I don’t know if it’s a time of year thing, a water conditions thing, or even a time-of-day thing. I just know they seem to be harder to find out of my boat.

I am looking for these fish most days when I’m out on the water and hope they start to get more on my pattern. With the hot temps that are forecast, hopefully, the dams will have to start moving water to generate power for folks to run their air conditioners.

Without much rain in sight, it doesn’t look like we are going to get any water movement from gates being opened at the dam.

On another note, I would like to let folks know that even with the high gas prices, I am staying on the water as much as I can with and without clients. Being on the water is the only way I know to keep up with fish movements.

Some folks may be good enough, but I am not good enough to keep current on things if I don’t stay fishing. Like I have said before, my wife allows me to live a dream, and I don’t have to fish to make my living. I do this to show folks a good time.

I will continue to make sure I fish at least the day before I take people out, as I feel they deserve to fish with a guide who has the most recent information from being on the water.

However, with the way the economy is, if I don’t have a lot of trips lined up, I will be taking a few days to do some electrical work as this is the trade that has put me into a position where I can fish as much as I do and afford the gas to do it. I can’t always be out having fun making the wife working! I have to at least give her a little break before duck season!!

While I don’t have sponsors, I fish solely out of my wallet. I would like to take the time to thank those that help this guide service be successful.

First and foremost, my wife Shareece, without her this doesn’t happen. I also want to thank Brad Culp and everyone at Sportsmans Bait Tackle and Marine Repair for going out of their way to keep me on the water.

I also want to thank everyone who helps with the Ronald McDonald House charity tournament that provides for families in need as well as the Marshall County Elks club for their upcoming post-traumatic stress disorder veterans tournament that they put on in the middle of June.

Thank you to these folks who take the time to give back. I have three trips this week so check out my posts on Instagram and Facebook to keep up with what’s going on.

As always thank you for your time! 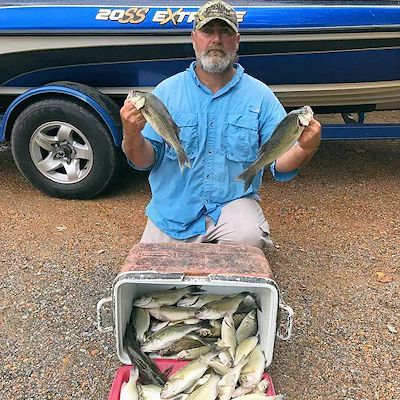 Eric Ashley is the owner/operator of Lucky Lady's Guide Service. He has been professionally guiding for many years and specializes in all major species of game and panfish.

His fishing report covers the northern end of Kentucky Lake and Lake Barkley.