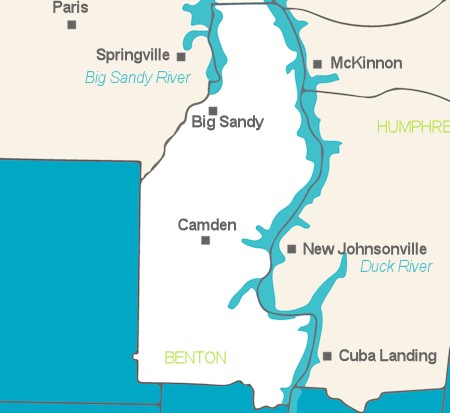 Benton County, Tennessee is situated on Interstate 40, US 70 and US 641 and lies in northwest Tennessee. The county is the southern gateway to the Kentucky Lakes Area. Kentucky Lake is the county's border to the east.

It is known well in the area for its duck hunting and fishing industries, and in the past, was recognized for sorghum production, although it is no longer produced there.

Benton County was established in 1835 from part of Humphreys County . It was named in honor of David Benton (1779–1860), who was an early settler in the county and a member of the Third Regiment, Tennessee Militia in the Creek War.

The city is situated along Cypress Creek, near the creek's modern confluence with the Kentucky Lake impoundment of the Tennessee River (the original lower 10 miles of the creek were entirely engulfed by Tennessee River with the completion of Kentucky Dam in 1944).

The area is characterized by low hills to the north and west and wetlands to the east, the latter of which is largely protected by the Camden Wildlife Management Area. Camden is centered around the junction of U.S. Route 70, which connects Camden to Nashville to the east and Memphis to the west, and Tennessee State Route 191, which connects Camden to Eva and Nathan Bedford Forrest State Park to the northeast and Interstate 40 to the southeast.

Camden and Benton County's main economic base is tourism and farming with Camden serving as a bedroom community for the Tennessee Valley Authority facility and the DuPont titanium dioxide production plant in New Johnsonville, TN, five miles to the east and on the other side of Kentucky Lake.

In the past, Camden and Benton County were known for sorghum production, however, the last sorghum production facility shut down in summer 2001. Tourism, however, is quickly supplanting it, with the well-promoted Tennessee Freshwater Pearl Museum at Birdsong Resort & Marina providing an influx of out-of-town dollars.

Pearls, both farmed and harvested in the wild, have been a staple of Benton County for years. The Tennessee River Freshwater Pearl Farm is the only one of its kind in North America. Birdsong Resort, Marina and Lakeside RV and Tent Campgrounds offers tours of the farm and museum daily located off Interstate 40 at the Birdsong Exit # 133 which is halfway between Nashville and Memphis.

Another notable event in Camden is the Bargain Highway, where parts of U.S. Highway 641 and U.S. Highway 70 are transformed into a 30-mile yard sale during Labor Day Weekend.

Native Americans were living and camping in the Camden area as early as Archaic period (8000-1000 B.C.). A substantial Archaic site has been excavated at nearby Eva (the actual site is now submerged), uncovering evidence of semi-permanent habitation dating back 7000 years.

The first Euro-American settlers arrived in the Benton County area around 1818, shortly after (and probably before) the county was purchased from the Chickasaw.

Camden has its roots as a stopover along the stage coach route between Nashville and Memphis. Initially known as "Tranquility," the community had attained the name "Camden" by the 1830s, a name influenced by the Revolutionary War-era Battle of Camden.

When Benton County was created in 1835, Camden was chosen as the county seat. The city of Camden was officially incorporated in 1838.