Kentucky Dam creates the largest manmade lake in the eastern United States - Kentucky Lake! The dam backs up the Tennessee River for 184 miles and creates the lake that stretches south across the western tip of Kentucky and nearly the entire height of Tennessee. At maximum normal operating level, Kentucky Lake covers 160,300 acres and features 2,300 miles of shoreline.

More important than the project's size are the jobs it performs. Kentucky Dam is the spigot that TVA (Tennessee Valley Authority) uses to help control floods on the lower Ohio and Mississippi rivers; it is the gateway to the Tennessee River waterway and is a major generating plant in the TVA power system.

To provide a dry river bed for construction, huge cofferdams were built in three stages, starting on the east side and working to the west embankment. 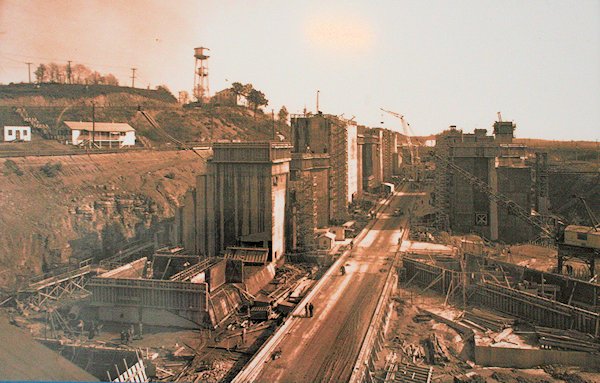 Construction of Kentucky Dam, sometime in the early 1940s.

The impact Kentucky Dam would have on flood control and commercial navigation was foreseen by TVA designers. Electrical generation was not a top priority in the original design; but today's generators contribute about 1.3 billion kilowatt hours of electricity each year for TVA's power system.

The Tennessee River is the nation's fifth largest river within the lower 48 states in terms of flow. Kentucky Dam is just 22 miles upstream from Paducah, Kentucky where the Tennessee River flows into the Ohio. Water from the 40,200 square mile Tennessee Valley passes through the dam.

This strategic location and the vast flood storage capacity of Kentucky Lake make it possible for Kentucky Dam to reduce or even temporarily shut off the flow of water from the Tennessee to help lower flood crests on the Ohio and Mississippi rivers.

With the other dams in the TVA system, it helps provide flood protection to 6 million acres of land in the lower Ohio and Mississippi valleys and reduces the frequency of flooding on another 4 million acres. In the many years since Kentucky Dam was completed, this flood regulation has reduced damages in those areas by millions of dollars.

Projects to improve navigation conditions on the lower Tennessee River began shortly after the Civil War, but it was Kentucky Dam and lock which finally provided a first-order channel for today's big inland towboats and barges.

Kentucky Lake is the first step in a stairway of navigable TVA lakes that allow modern 9-foot draft vessels to travel the 650-mile-long main river the year round. Since impoundment of Kentucky Lake in 1945, completing this waterway and linking the Tennessee Valley with the 21 state inland waterway system, freight traffic on the Tennessee has grown from 2 million tons a year to more than 31 million tons.

The lock, at the eastern end of the dam, handles more than 2,000 loaded barges a month. This normally requires lifts of about 55 feet between the river below the dam and the lake behind it. A river tow bound upstream may carry steel from the north, grain from the midwest, or petroleum products, chemicals, or ores from the Gulf Coast.

Down-bound tows carry a variety of Tennessee Valley products to other regions, including nuclear reactor vessels too large to travel overland.

The five turbine-generators in Kentucky Dam powerhouse have a total capacity of 175,000 kilowatts. They harness the river's flow to generate up to 1.3 billion kilowatt-hours of electricity each year.

Some of this water comes from the river's headwaters and already has helped to spin turbines at a dozen other TVA dams as it flows a thousand winding miles down the Tennessee Valley.

Kentucky Lake is a magnet for vacationers and fishermen from a wide area of mid-America, with recreation use amounting to some 17 million visits each year. Along its nearly 2,300 miles of cove-studded shoreline are many boat docks and resorts, several state parks, the Tennessee National Wildlife refuge, 48 public access areas, many county parks and municipal parks, state wildlife management areas, a dozen group camps and clubs, nearly 100 commercial recreation areas, and three small wildlife areas.

Begin planning your vacation here on KentuckyLake.com by searching for Accommodations.