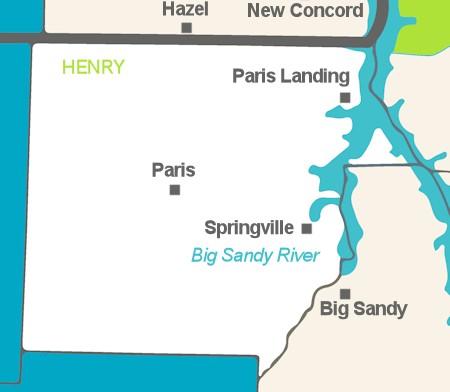 Henry County was named in honor of Revolutionary War patriot and statesman, Patrick Henry (who first said, "Give me liberty or give me death!").

Henry County became the gateway for the settlement of west Tennessee and beyond.  The town of Paris was established as the county seat on September 23, 1823, and became West Tennessee's oldest incorporated municipality. The town was named for the French capital in honor of Lafayette, who visited Tennessee in the early 1800s.

Henry County sent more than 2,500 volunteers to the Confederacy and was given the title "Volunteer County of the Volunteer State" for providing more volunteer soldiers per capita than any other county in Tennessee.

Located in Henry County on the west bank of beautiful Kentucky Lake in west Tennessee, halfway between the metropolitan areas of Nashville and Memphis. Paris is the second-largest city in the Kentucky Lakes Area (pop. 10,057) with a vibrant spirit.

Situated near the natural beauty of Land Between the Lakes, Kentucky Lake and Paris Landing State Park, Paris is also home to the World's Biggest Fish Fry, Catfish Races, an annual arts festival, and many other community activities.

Boasting a downtown surrounded by an old-fashioned Main Street shopping district. Paris is also home to a 60-foot high scale model of the Eiffel Tower located in Memorial Park.

Paris Landing State Park is located on US 79 in northeastern Henry County. The state park features a swimming pool, lodging, beach area, a large marina, and much more.