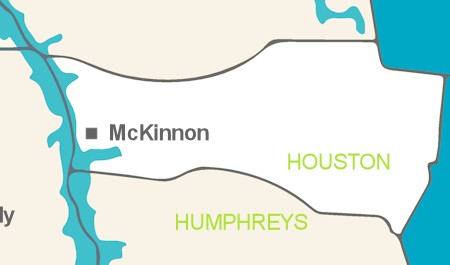 McKinnon is a small unincorporated community on the banks of Kentucky Lake in Houston County, Tennessee. The area is very peaceful and undeveloped - perfect for those who are wanting to spend their time fishing at the lake in solitude.

Although the community is known as McKinnon today, this used to be the site of Danville, which featured a large railroad bridge crossing the lake and a partially submerged transfer elevator.

The half-missing bridge and transfer elevator are oddities - relics of a time before the 1940s when Kentucky Lake was created. You can read about the old L&N Railroad Bridge, the old town of Danville, and the old transfer elevator on Four Rivers Explorer.

The county seat is Erin, but aside from Erin, other major communities include the community of Tennessee Ridge, which the whole county is rich in Irish heritage.

Cradled in the heart of Tennessee's natural wonder and magical charm, 200 jewel-like acres of Houston County are nestled quietly in a range of hills and valleys, unequaled in beauty by any part of the highland rim portion of the state.

According to legend, Irish railroad workers who were reminded of the valleys, hills, hollows, and meadows of their homeland, Ireland, gave the name Erin to this small community. One night, the workers took a "wee drip too much" and let out the ancient rallying cry, "Erin Go Braugh." The name stuck and a celebration of Irish heritage and blessings takes place annually during the third week in March when everyone is "Irish in Erin."

The Houston County Area Chamber of Commerce, other local leaders, and interested citizens conceived the idea of an Irish Celebration for Erin in 1963. The focus of this annual event was to be the welfare, progress and promotion of the town and county. The local population went in the venture rather slowly.

They liked the idea, but some felt it may be a bit too big for such a small body of citizens. However, the "Wearing of the Green" was a successful event that year and has continued each year to grow in interest and attendance.

From the Grand Parade, Leprechauns and banquets to carnival rides, pageants and arts & craft booths, there is something for everyone. Relive the spirit of St. Patrick at one of the largest St. Patrick's Day celebrations south of Chicago!