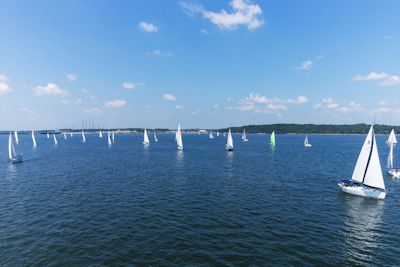 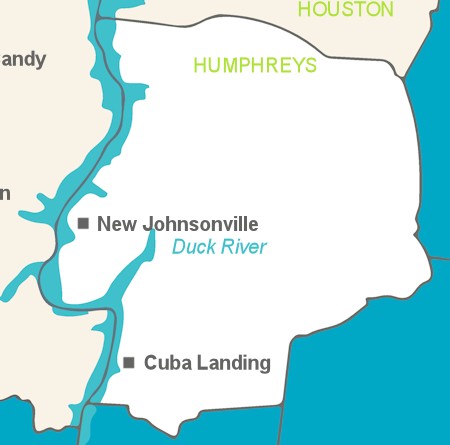 Humphreys County was established in 1809, in the northwest region of Tennessee, 30 miles south of the Kentucky border, and is in the central time zone.

One of Humphreys County's largest attractions is Loretta Lynn's Ranch and Family Campground near Hurricane Mills. Visitors are allowed a glimpse into the personal life of country music legend, Loretta Lynn, with family entertainment from April through November of each year.

The museum and gift shop depict various aspects of Lynn's life. The ranch also sponsors the AMA National Motocross Championship as well as concerts, trail rides and other activities throughout the year. The city of Waverly is host to "Music on the Square" every Saturday night during the summer months. This lively entertainment event features different performers each week and is free to the public.

In McEwen, St. Patrick's Irish Picnic and Homecoming, held the last Friday and Saturday in July, is one of the world's largest outdoor barbeque events. Drawing thousands of visitors each year, St. Patrick's famous barbequed pork, chickens, sauce and fixings keep visitors coming back for more.

Readily accessible to transportation via railroad, waterways, highways and interstates has facilitated the growth of several types of industry in Humphreys County. A small airport, located in Waverly, serves private aircraft. Blue Creek Nature Center, located just outside Waverly and the Tennessee National Wildlife Refuge, which runs along Duck River, encompasses more than 52,000 acres and is perfect for observing a look at untouched wildlife.

The peaceful blue waters and many marinas make these popular getaways for the entire family. Avid fishermen and hunters find a paradise along the refuge with organized hunts and fishing tournaments.

The population was 4,080 (2018 US Census Estimate) with the city situated in the Trace Creek Valley, just over 10 miles (16 km) east of the creek's confluence with the Kentucky Lake impoundment of the Tennessee River. The low ridges that "wall in" Waverly to the north and south represent the fringe of the western section of the Highland Rim. Waverly is centered around the junction of U.S. Route 70, which connects the city to Nashville to the east and Memphis to the west, and State Route 13, which connects the city to Hurricane Mills and Interstate 40 to the south and the rural areas around Erin to the north. According to the United States Census Bureau, the city has a total area of 8.1 square miles (21.1 km²), all of it land.

Waverly was established by Steven Pavatt as a stop along the stage coach road between Nashville and Memphis in the early 19th century. Pavatt was a fan of the author Sir Walter Scott, and named the community after Scott's Waverley Novels.

When Humphreys County was created in 1803, Reynoldsburg, located northwest of Waverly along the Tennessee River, was chosen as the county seat. However, when county lands on the west bank of the Tennessee split off to become part of the newly-created Benton County in 1835, the Humphreys County seat was moved to Waverly, which had become the more central location in the county.

A courthouse was built in 1836, and the town was officially incorporated in 1838. Like most of Middle and West Tennessee, Waverly was staunchly pro-Confederacy during the U.S. Civil War. Humphreys County voted unanimously in favor of secession in 1861.

Union troops occupied the town in 1863 to guard the railroad between White Bluff and Johnsonville (now Old Johnsonville), the latter being a Federal supply depot and transfer station. The Union troops managed to build a fort at the courthouse square, although they were constantly harassed by Confederate guerillas.

On November 4, 1864, Confederate troops under Nathan Bedford Forrest attacked and destroyed the Federal depot in what became known as the Battle of Johnsonville. The battle occurred approximately 10 miles (16 km) west of Waverly at the mouth of Trace Creek. Hurricane Mills, located a few miles south of Waverly along TN-13, was the site of a substantial mill and carding factory in the late 19th and early 20th centuries.