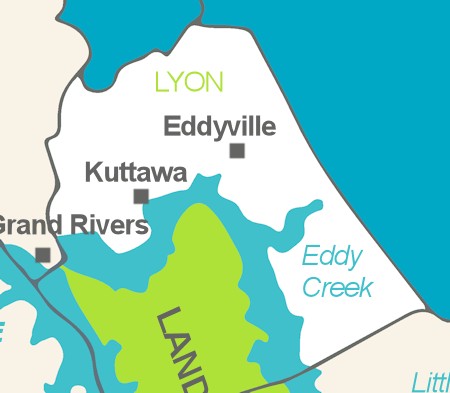 Lyon County is located in western Kentucky on the shores of Lake Barkley.  The community still retains the old charm of a small rural farming area but with the impoundment of the two lakes and the establishment of Land Between The Lakes Recreational Area, this place has become a tourism, vacation and retirement community.

Lyon County's permanent residents only number about 8,000 but residency can easily reach tens of thousands during the summer months and holidays. Lyon county was formed in 1854 with much of the county within Land Between the Lakes.

Eddyville is home to about 2,500 residents and is located very near Lake Barkley. The town is the county seat of Lyon County.

Following the completion of Kentucky Dam in the 1940s, rumors began that a dam would be built on the lower Cumberland. This would mean relocating Eddyville and Kuttawa. By the mid-1950s, the people's fears (or wishes) were confirmed. The U.S. Army Corps of Engineers began surveying for the construction of Barkley Dam.

The entire population of Eddyville woudl be affected with decisions to be made. Where would they move? Were they getting a fair price? This ordeal caused many angry feelings among some of the residents, which would last a lifetime.

It was about this time that Lee S. Jones entered the picture. Jones was a native of Lyon County who had attended law school and settled in Louisville, where he had gained a reputation as one of the best "tax lawyers" and also had accumulated enough money to be considered quite wealthy.

Jones had purchased farms in the Fairview community (which is now the site of Eddyville). He came to the Eddyville City Council and presented his plan: each person owning land in the towns (Eddyville and Kuttawa) to be flooded would receive a free lot in the new Eddyville site. This also applied to businesses.

Eddyville residents accepted his offer and on August 13, 1959, the official plat for the new town was filed with the county court clerk. The plat included 254 residential lots, 46 business lots, 28 acres (110,000 m 2 ) for construction of a school and campus, city park, courthouse, health office, water works, and location of streets.

August 28, 1959 was designated as "Dedication and Free Deed Day" at the new site. A large group of people gathered for the event which was held in a field (in front of where the post office is now located). Mr. Jones handed the first deed to Boyce and Lillian Yates, then presented approximately 60 more residential lots.

The first house to be built in the new town was the home of Mr. and Mrs. J. I. Moore. The first business to be built was the Kentucky Utilities office. During the time of building, Eddyville was "booming", and with the impoundment of Lake Barkley in the 1960s, tourists began making their way into the area for the abundance of fish and boating.

The influx of tourist did not happen as rapidly as most people had envisioned and hoped. Although campgrounds and marinas were springing up around the lake, the city was struggling. December 1988 brought the ground breaking for the West Kentucky Outlet Mall. Three brothers, Bob, Darrell and Ben Jent purchased a tract of land in the city limits of Eddyville and started construction of a mall, which opened the following fall with ten stores.

Within a short time the mall would boast a total of nearly 50 stores.The opening of the mall brought a surge of progress to Eddyville, and all types of businesses began to move into the city. For the first time in the town's history, people could choose their favorite restaurant, motel, clothing store or other places to shop all without leaving town.

It has been said the mall did more for the progress of Eddyville than any other endeavor since the establishment of the town in 1799, with the possible exception of the building of the Kentucky State Penitentiary. In 1997, the town was listed as the second fastest growing tourism area in Kentucky in 1997. Eventually the mall began to decline with the boom of ecommerce, but a new waterpark was built nearby which provided another boost to local tourism.

Throughout Kentucky, Eddyville is best known as a synonym for the Kentucky State Penitentiary , although the prison itself is actually 3 miles (5 km) south of the present town, on the shore of Lake Barkley in Old Eddyville on KY 730. Taking six years to build (1884 - 1890), the massive stone prison structure towers over Lake Barkley, and is sometimes called "The Castle on the Cumberland."

Venture River Water Park is western Kentucky's only waterpark. Here you'll find a 480,000 gallon Hurricane Wave Pool and endless Old Man River. For young children, the park has the Pleasure Island Kiddie Pool with a play structure with interactive water features and kid's castle with slides just for them.

Thrill-seekers will find a selection of body and tube slides, including Waloopas, a giant enclosed tube slide that you descend while riding a single or double tube, and Dueling Demon Speed Slides, two body slides that descend seven stories. Also includes the new ride, the Fumbi, which is a tube slide that has three huge humps dropping around 15 feet each, at a total of around 50 feet, riding down on a clover tube that seats 2-4 people.

To find out more about Eddyville and Lyon County, visit LakeBarkley.org.