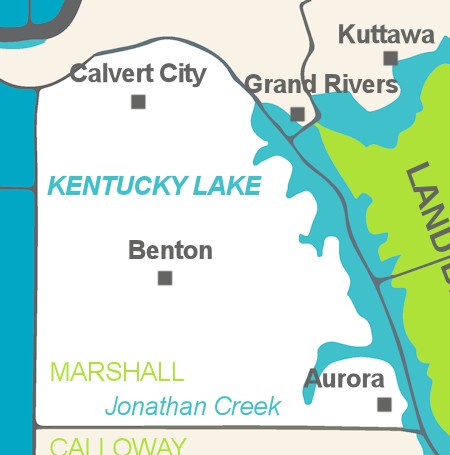 Marshall County has an unsurpassed quality of life. Nestled on the shores of one of the largest manmade lakes in the eastern United States, our small town atmosphere, combined with our access to larger metropolitan areas, Land Between The Lakes National Recreation Area, our highly rated school system, and abundance of job opportunities, make this an ideal place to live, work and succeed.

Marshall County has wonderful recreational opportunities and parks, public and private golf courses, award winning schools, many churches, and an array of retail and restaurants available for residents of Kentucky Lake communities . All this, in addition to all the amenities that being located on a lake can offer.

Marshall County has several large employers in and around our area to provide our residents with plenty of employment opportunities. The Marshall County School System is outstanding with a very impressive high school campus complete with a state-of-the-art performing arts center and offers a variety of extra-curricular activities. The community is well-known for its strong support of its schools.

We also have Christian Fellowship, a private K-12 school system as well as several colleges and universities within close proximity such as Murray State University and West Kentucky Community and Technical College.

The creation of Kentucky Lake by the Tennessee Valley Authority in the 1940s brought tourism and industry to the county with resorts along the lake and chemical and manufacturing plants, mostly in the Calvert City area, attracted by the dam's cheap and plentiful electricity.

On the first Monday of April, Benton holds its Tater Day. Originating in 1842 as a day for farmers to gather at the County seat to trade their agricultural goods, today Tater Day is a celebration that includes a festival and parade. Tater Day derives its name from the main items traded--sweet potato slips. Tater Day is the world's only celebration of the sweet potato.

On the fourth Sunday of each May, The Big Singing, an all-day sing-along program of Southern Harmonyshape note gospel music is held at the county courthouse. While other major singings (for example, Sacred Harp Singings) still survive, The Big Singing, begun in 1884, is the only singing in the world to use the William Walker Southern Harmony system of shape-note singing.

To find out more about Benton & Marshall County, visit VisitKyLake.com.