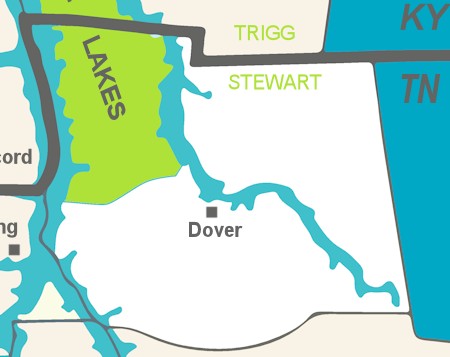 Dover is off of Lake Barkley (the Cumberland River) and is home to 1,480 as of the 2018 US Census estimates. It contains one of the oldest national cemeteries at Fort Donelson National Battlefield. The northern portion of the county is in Land Between The Lakes.

These attractions bring many tourists into the community, especially during the summer.

The main portion of the park, in Dover, Tennessee , commemorates the Battle of Fort Donelson, which was one of the most influential battles in American history. The most vulnerable area in the Confederate defensive line in the Western Theater was the state of Kentucky.

The Tennessee and Cumberland Rivers were potential avenues for a Union invasion through Kentucky and into Tennessee and beyond. Since Kentucky had declared itself neutral, Confederate defensive works could not be built within the state without risking alienating the local population.

Two engineers detached from the 1st Tennessee Infantry, Adna Anderson and William F. Foster, set to work on May 10, 1861, to find suitable ground just inside the Tennessee border to simultaneously cover the two strategic rivers. They focused on surveying possible sites along the Cumberland River, noting the high ridges and deep hollows near the Kentucky border.

In mid-May, on the west bank of the river not far below Dover, Anderson laid out the water battery of Fort Donelson, twelve miles (19 km) from the Kentucky line. The new fort was named in honor of General Daniel S. Donelson, who, along with Colonel Bushrod Johnson of the Corps of Engineers, approved of the site.

Construction was begun by a large force of men brought from the nearby Cumberland Iron Works.

In July 1862, Congress passed legislation giving the President of the United States the authority to purchase land for the establishment of cemeteries "for soldiers who shall die in the service of their country." The legislation effectively began the national cemetery system.

In 1863, the Union Army abandoned the Confederate works and constructed a new fortification on the ground that became the cemetery site. A freedmen's community developed around the new Union fort. Four years later, this same site was selected for the establishment of the Fort Donelson National Cemetery and 670 Union soldiers were re-interred here.

These soldiers (which included 512 unknowns) had been buried on the battlefield, in local cemeteries, in hospital cemeteries, and in nearby towns. These totals include five known and nine unknown soldiers from the United States Colored Troops.

The high percentage of unknown soldiers can be attributed to the haste in cleaning up the battlefield and the fact that civil war soldiers did not carry government-issued identification. In 1867, Fort Donelson Cemetery was established as the final resting for Union soldiers and sailors initially buried in the Fort Donelson area. Today the national cemetery contains both Civil War veterans and veterans who have served the United States since that time.

Today visitors can enjoy the historic sites and attractions at Fort Donelson.