Land Between The Lakes is full of historic sites, dating back to the pre-Civil War days. Remains of iron furnaces, heritage sites and even Civil War battlefields are present in LBL.

Throughout the mid-1800s, our region was home to a short-lived iron production industry.  Eight iron furnaces operated in present-day Land Between The Lakes at one time in the 1800s.  Today, two of those have survived, most notably the Great Western Iron Furnace.

This furnace only operated for two years beginning in 1854 due to it's location.  Roads didn't exist as we know them today back 170 years ago. The roads that were around at that point were atrocious, especially when attempted to transport freight. The only reliable transportation then were by way of rivers - the Tennessee and the Cumberland - which were too far away from the Furnace.

According to history, the furnace also experienced a labor shortage and slave insurrection.

The Great Western is located right on the Trace in southern Land Between The Lakes, not too far from The Homeplace 1850s.  You'll know it when you see it!

This furnace is located between Hematite Lake and the Woodlands Nature Station.  Despite it's dilapidated condition, it's still interesting to see and there is a great self-guided tour around the ruins that explains the historical significance of the furnace and community surrounding it.  There are displays explaining how iron was produced with these furnaces using nearby resources.

Center Furnace operated during the Civil War and was one of the longest-operating furnaces during that time.  You can read much more about Center Furnace on our sister site, Four Rivers Explorer.

This fort, now mostly under the waters of Kentucky Lake, saw action in the winter of 1862 as General Grant's Union troops arrived from the Tennessee River (now Kentucky Lake).

There are still earthworks that can be viewed and a few interpretive signs to give visitors a bit of the history of the fort.

While the site includes minimal attractions, one thing visitors do enjoy is walking and biking the Fort Henry Trail System. These trails follow General Grant's route from Fort Henry to Fort Donelson during the War.

The trail system is comprised of a series of 10 connecting trails which encompass about 26 miles of terrain, that ranging from river bottomlands to forest uplands. 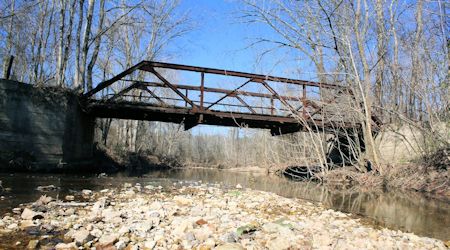 This abandoned bridge across Pryor Creek in Land Between The Lakes is way off the beaten path.

There are several areas in Land Between The Lakes that show former signs of life from residents of the area before it was taken by TVA in the 1960s. Some of the lesser-known places are documented on Four Rivers Explorer. Here is a short list: