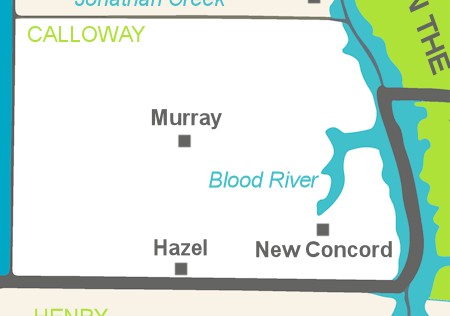 Murray and Calloway County are the largest city and county in the Kentucky Lake area. With several lodging opportunities, over 60 restaurants and several national retail and local boutiques, Murray is a great place to spend time on your next trip to Kentucky Lake, Lake Barkley and Land Between The Lakes.

Calloway County was established in 1821 and named in honor of Colonel Richard Callaway. Murray, the County seat, is located in extreme southwest Kentucky. The County's population in 2019 was 39,135 in a land area of 386 square miles.

According to the U.S. Census Bureau, the county has a total area of 411 square miles (1,064 km2), of which 386 square miles (1,000 km2) is land and 25 square miles (65 km2) is water. Calloway County offers a low cost of living, low property taxes, a four-season climate and excellent educational systems. This, along with being named one of the 100 best communities for young people, makes Murray an ideal place to live.

Murray, Kentucky, boasting over 19,000 residents, is located in Calloway County, is the home of Murray State University and is only a short drive from both Kentucky Lake and Land Between the Lakes. Whether you have always lived in Murray, attend Murray State, are just here for a visit or are one of the many who chose to relocate to this certified retirement community, it feels like home.

The history of Murray was very renowned for beginning as simply a trading center and post office in the 1820's. That time it was called Williston in honor of Kames Willis, an early settler. Later the name was changed to Pooltown after Robert Pool, a local merchant. Then once again, it was changed again to Pleasant Springs, until in honor for Congressman John L. Murray, its present name was adopted on Jan. 17, 1844.

Murray was not the original county seat of Calloway County. In 1822 Calloway County and Marshall County were but one single county with the county seat being Wadesboro. In 1842, the state legislature divided the area into two separate counties. Shortly thereafter it was decided that a new county seat would be developed, more centrally located than Wadesboro.

A site was selected at the geographic center of the county, a village named Murray. A courthouse was quickly built along with a jail. Murray was formed on an 80-acre (320,000 sq. meters) plot and was subdivided into 137 business and residential lots with eight streets total in the village, thus the birth of Murray.

While officially Murray and Calloway County were declared neutral during the Civil War, there was a large following of the Confederate States of America late in the war. There were not a lot of large conflicts that took place in the town of Murray, but the citizens did see some guerrilla warfare.

In the spring of 1862 the general of the Union forces stationed in Paducah, Kentucky made his way to the Tennessee River, taking whatever property he wanted from the Murray townspeople. On more than one occasion, the town of Murray was burned.

There have been estimates that 800 men from the area joined the Confederate States of America, while 200 joined the Union.

To this day, a monument on the northeast side of the court square stands, honoring the Confederate States of America. The monument was a gift from the United Daughters of the Confederacy. It is the only Confederate monument in the south that does not face squarely north. There have been many myths as to why this is, but nothing substantial has been made official.